Professional goalies especially in the NHL have an opportunity that most goalies or hockey players generally don’t have, customizing their own equipment. Some guys decide to take the conservative route and use basic color schemes with white or black base colors, and a select few goalies in the NHL decide to stand out and make sure they’re noticed throughout the entire arena. Today we honor those men. This list consists of some of the best and  most unique goalie gear of the 2011- 2012 season.

Enroth decided to go with a color scheme that would match up nicely with Buffalo’s home and away sweaters.

Lawson has worn pads with base colors that match his team’s main color before, but these are the best pads I’ve seen him wear.

The Conn Smythe Trophy winner wore these pads when the Kings wore their throwbacks.

Neuvy started off the season with the all-red pads but switched to a white set for the second half of the season. 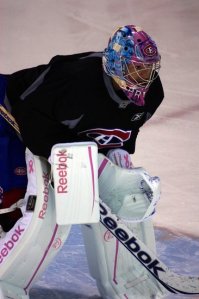 Price wore these white pads with pink accents for the month of October as a part of the NHL’s Hockey Fights Cancer campaign. 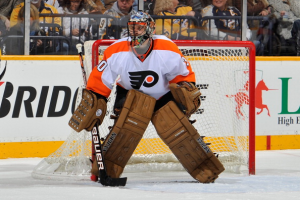 Bryz was supposed to wear these pads in the 2012 Winter Classic, but since Sergei Bobrovsky started and played instead of Bryz, he wore these beauties in the regular season shortly after the Classic. 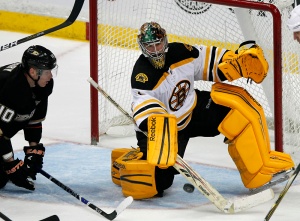 Marty was signed by the Bruins on March 7th to back up Tim Thomas while Tuukka Rask recovered from an abdominal strain. Marty made the most of the short time he had in Boston by picking these bright yellow Reeboks. 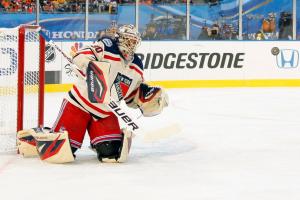 King Henrik has always been known for his great gear and uniquely painted masks, but Lundy one-upped himself when he led the Rangers on to the ice for the 2012 Winter Classic with these special edition, crème-colored Bauers. 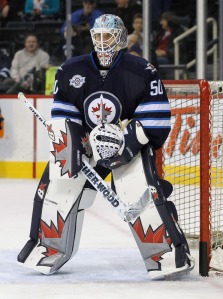 Chris Mason is another goalie that has always been known for his unique gear, and Mason shocked the world when he debuted these custom Jets pads by Brian’s.