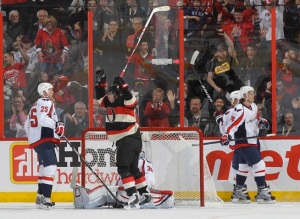 If a regulation hockey game was forty minutes long, the Capitals would own a 2-3-1 record. Such is not the case however, as the Washington Capitals blew a two goal lead that they held for over half of their game with the Ottawa Senators on a frigid Tuesday night. It was a game in which it seemed as though the Caps had finally gained some form of a comfort level with Adam Oates’ new system, and for the majority of the first two periods, Washington looked like a very dominant, and efficient hockey club. Troy Brouwer opened up the scoring in bitterly cold Ottawa just passed the thirteen minute mark of the first period when Wojtek Wolski turned a loose puck over at center ice and created a two-on-one opportunity with Brouwer. Wolski snuck down the left wing and fed a saucer pass to the forehand of Troy Brouwer in the low slot, who then passed up the quick shot, and opted to deke Craig Anderson. Brouwer finished the play by tucking the puck on his backhand passed a sprawling Anderson, who actually caught a piece of it before he saw it roll across the goal line.