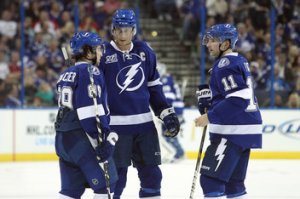 Well, at times it wasn’t pretty, but hockey was back in full-fledged action on Saturday. Mistakes are still to be made, and rust still to be shed, but for now, it will do. The Washington Capitals and Adam Oates made their long anticipated debut Saturday night against the Tampa Bay Lightning, but ultimately fell short in a 6-3 loss. The Caps looked to be in control, even dominant at times, early on in the first. Much of that had to do with an early interference penalty drawn by Alex Ovechkin followed almost immediately by another penalty by Tampa which ultimately led to the Capitals being on the power play for four of the game’s first five minutes. The Caps had plenty of chances, but Tampa’s newly acquired goaltender Anders Lindback proved that he was up for the challenge of being a starting goaltender for the first time in his career.

As the game wore on, it was clear that this team has some learning, and, perhaps conditioning to do as the season progresses. At times, the game became sloppy and unorganized. No moment was more clear of this than on Tampa Bay’s Captain Vincent Lecavalier’s goal that gave his team a 2-1 lead in the first period. The goal was scored on a rebound resulting from a mad scramble by the Capitals in their own defensive zone. Players were caught out of position resulting from a poor clearing attempt. After a bad turnover in front of the net and a couple of spectacular saves by Braden Holtby, the puck eventually found Lecavalier’s stick with an open net from the top of the goal crease.

It was moments like these that served as a reminder that this is the first of 48 games that the Caps will play in a new system, with a new coach, and are still getting reacquainted with one another. Despite the loss however, there were a couple of positives to take away from game one of in the Oates era. To start, Joel Ward recorded his first multi-goal game as a Capital and the fourth of his career. Both were scored by Ward’s will, strength, and relentless effort to get to the net and muscle his way for loose pucks. These were the traits that the Caps were hoping they would get out of Ward when they signed him as a free-agent two summers ago and serves as a positive sign that he is starting to play like he did in Nashville where he made a name for his brand. Additionally, Wojtek Wolski had a strong first outing as a Capital that included his first goal in DC. If secondary scorers  like Ward and Wolski can put pucks in the net on a consistent basis, it will only be good news for Washington and will alleviate some of the pressure felt by superstars Alex Ovechkin and Nicklas Backstrom.

And then there was Tom Poti. It looked as though he struggled in his first NHL games in a little over two years. He often times found himself a step too slow, leaving him out of position. Poti himself acknowledged after the game that he felt rusty and needs to adjust to game speed.  He will also need to regain the endurance that it takes to play in a full 60-minute game, something he is still adjusting too.

While it is still early, the Caps do not have a ton of spare time to make the proper adjustments to have a successful 2013 campaign. Not playing again until Tuesday should certainly help, but there is clearly there is a lot of work to be done. Alex Ovechkin and co. will have to work even harder to break in the new systems they have been charged with learning and 16 minutes of power play time certainly doesn’t make that task any easier.  We’ll be able to glance a little further into the crystal ball to see how well this team is adjusting as division rival Winnipeg coming to town. It is another all-important game that Washington can ill afford to lose in an abbreviated season with such a heavy dose of divisional opponents on the schedule. Game time is at 7.