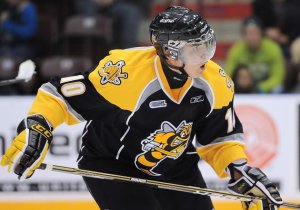 Yakupov is far and away the favorite to be selected 1st overall. Yakupov has 22 Goals and 33 Assists so far this season and 101 total points last season with the Sarnia Sting. If selected by Columbus, Yakupov would more than likely be skating with Rick Nash and Jeff Carter on the top line opening night.

Assuming Ryan Smyth or Ales Hemsky leaves Edmonton via Free Agency, Taylor Hall or Jordan Eberle will take their spot on the top line. Filip Forsberg would be able to take Hall or Eberle’s spot on 2nd or 3rd line.

With Carolina’s log jam at the Forward position and 2 over 30 year old defensemen (Jaroslav Spacek and Bryan Allen) hitting unrestricted free agency this offseason, Ryan Murray is a no-brainer at the 3rd pick. Murray is the Captain for Everett with 7 Goals, 12 Assists and 23 PIMS in 25 games played.

A lot of mock drafts have Grigorenko going to Edmonton at #2 and some even have him going #1 to Columbus, but this one doesn’t; unless Anaheim’s record allows them to pick earlier. Either way they’ll take Grigorenko. With the potential loses of Teemu Selanne, Saku Koivu, Jason Blake and Niklas Hagman to Free Agency this offseason Anaheim cannot afford to pass him up. Grigorenko has 28 Goals and 37 Assists for Quebec so far this season.

Dumba is an option for Buffalo because they are relatively young up front and getting up there in age on defense. Dumba has 37 total points and 53 PIMS so far this season for Red Deer and has been compared to Drew Doughty of the Los Angeles Kings.

Galchenyuk had surgery on his knee and has been out so far this year. That being said, he is still a good pick at #6. Galchenyuk had 31 Goals, 52 Assists and 52 PIMS in the 2010-2011 season for Sarnia. Galchenyuk was also linemates with Nail Yakupov last season.

At 6’4″ and 204lbs Reinhart is one of the biggest d-men in this draft class. Along with his size he is an offensive minded puck moving defenseman with 11 Goals and 14 Assists so far this season. Reinhart could potentially be a nice fit paired with Mark Streit or Calvin de Haan.

With a GAA of 2.03 and a Save % of .953 Vasilevski helped Russia win a Silver Medal in this year’s World Juniors. Vasilevski will be battling with Mathieu Garon for the starting role if Dwayne Roloson doesn’t return and Tampa is pretty shallow at the Goalie position to begin with.

Collberg is a reach here but the Coyotes need a lot. Collberg plays the fast and discipline driven game that Phoenix likes to use. In the 2012 World Juniors Collberg has 4 Goals, 3 Assists and 0 PIMs in 6 games.

Rielly is still dealing with a lower body injury but is expected back to Moose Jaw before the end of the season. Rielly has been compared to Duncan Keith of the Chicago Blackhawks and in 18 games played this season Rielly has 3 Goals and 15 Assists.